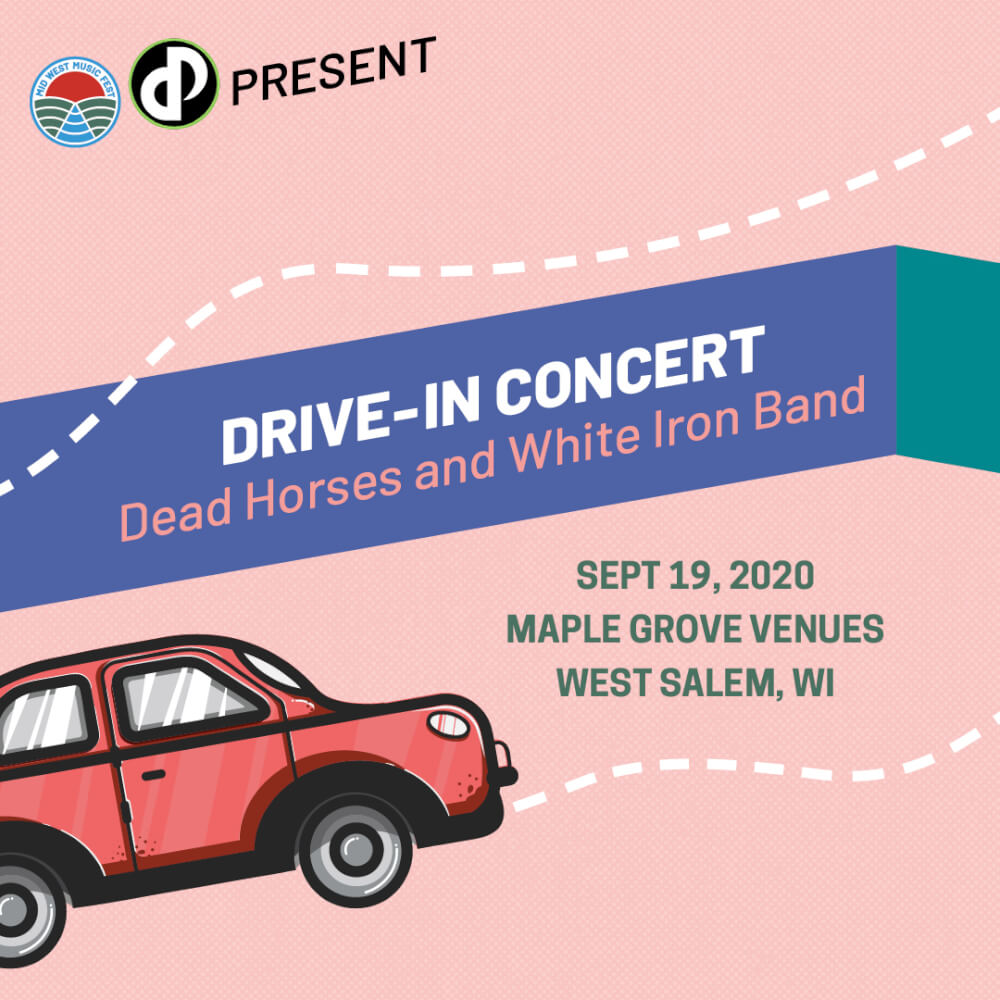 Mid West Music Fest has been forced to adapt to the times. While conditions have not allowed many opportunities for people to gather for concerts, MWMF is excited to partner with Deece Productions to present a Drive-In show at Maple Grove Venues. The performance will be Saturday September 19 from 6:00 PM – 9 PM. Milwaukee-based folk rock act Dead Horses and Minneapolis-based honky-tonk Americana band White Iron Band will be the evening’s entertainment.

Dead Horses isn’t a band in the conventional sense. Rather, it’s an intimate, folk-inspired conversation between two close friends. At its core, the participants are guitarist/singer Sarah Vos and bassist Daniel Wolff. To date, Dead Horses has released three albums—two which have been produced by Ken Coomer of Uncle Tupelo/Wilco—an Audiotree Live Session, three singles, and a two-song EP. Dead Horses has charted on the Americana Top 50 radio charts for three months and accrued over 20 million spins on Spotify for the single “Turntable” which was also featured on Amazon and Apple “Americana” playlists.

The White Iron Band is a high-energy renegade American roots band specializing in foot-stompin’, forget-what-troubles-ya music. With energy to blow your face off and enough soul to well your eyes, the band is best taken live with friends and strangers. The band was originally formed in Ely, MN, the heart of Minnesota’s northern Iron Range, by frontman Matt Pudas, keyboardist Eddie Juntunen, and guitarist Sammy Weyandt. Backed by a driving rhythm section with Jeff Underhill on drums and bass guitarist Andy Ferkinhoff, slide guitar and rhythm/lead from Gregg “Cheech” Hall and accompanied by the tear in your beer undertones of Lee “Big Country” Martin (Feeding Leroy, Kind Country) on Pedal Steel guitar. The White Iron Band embodies the triumphs and struggles of the everyday man.

Tickets are $50 per vehicle for 1-2 people and $60 for 3-6 people in your car. Tickets are not available at the gate, online sales only. Parking will be assigned on a first come first serve basis on show day.

• We ask that attendees wear masks in all common areas (check-in, bathrooms, etc) practice social distancing & practice handwashing measures.
• Children must be accompanied by an adult in all common areas.
• Cars will check in via ticket and license plate number.
• Maple Grove Venues is also helping to sponsor this event – ALL ALCOHOL ON THE PREMISES MUST BE PURCHASED FROM THEM. We ask you to use a Designated Driver.
• You can bring your own food and picnic set-up, BUT NO EASY UPS PLEASE.
•No fires or charcoal grills or gas grills are allowed.
• Absolutely no dogs allowed.
• Those not respecting social distancing and rules will be asked to leave.
• In the event of cancelation before the music starts for any reason, we will refund all ticket purchases.

We will be doing everything we can to ensure you of the safest possible concert experience given the times in which we are living. We ask for everybody’s patience, cooperation, support, and understanding while trying to get back to live music.

Let’s BE SAFE and lead by example!